Final Round Preview – The Showdown

Final Round Preview – The Showdown

The 5th season of NKC is almost complete, but we have one last round of action to look forward to. The season so far hasn’t been without its challenges, but it’s been fantastic to get through it all after the start-stop mayhem of 2020. Thank you all for your fantastic support and for making this one of the most successful national championships in the UK.

Round 6 at Clay Pigeon is just around the corner, where we will crown our champions but also celebrate some great achievements throughout the fields in all 3 classes. Don’t forget the top 10 drivers in each class will earn those coveted seeded numbers for the 2022 season.

In TKM Louis Beavan has been consistently fast and driven superbly, putting him in a dominant position. Our reigning champion, Mitchell Ball has continued to show his class and is locked in a battle for 2nd place with Matthew Harris, another quality driver having a great year. Realistically though, barring some sort of miracle (or disaster), it looks like Louis will be taking home the cup.

In the TKM Masters class, Jamie Jakins currently occupies top spot, but unless he comes out of retirement to defend the position, there’s a chance he’ll be knocked off his perch. One of the other Masters will need to have their best result of the season to accumulate the necessary points though.

Senior Rotax has been hugely competitive and we’re expecting fireworks. Tom Storrar is leading the way, closely followed by Simon Keeble, who’s going to need to avoid any more bad luck if he’s going to claim the title. Harry Wainwright has been extremely quick all year and has an outside chance if he has a very strong round and other results go his way. Housewives’ favourite, Matt Hildred is also in touching distance and ready to pounce, but is he just too far back this time?

The Rotax 177 class shocked us with its popularity this year, having gone from our weakest class in 2020 to our strongest this year, in terms of entries. It’s been highly competitive too, particularly at the sharp end, with Karl Bryant and Adam Haines slogging it out all season. Adam has dominated, with 4 final wins to Karl’s 1. However, Karl is a superb competitor and counts Clay Pigeon as his home track, so who would bet against him overcoming just a 19-point deficit?

Alfie Williams in 3rd has had a strong season but having missed a round is now too far back to catch the front 2. He will need a strong finish though to hold on to the final podium spot ahead of the always quick Rhys Llewellyn. 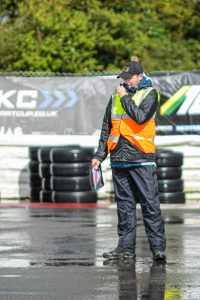 Whilst we have your attention, we would like to give special thanks to our team of officials, who have gone above and beyond to ensure the events run smoothly and the events simply couldn’t happen without them. Michael Headington, our clerk, has been attentive, fair and consistent throughout and is finding the right balance to suit the NKC way. It can be a thankless task at times, but he relishes the challenge and it’s great for us to have the consistency he provides.

Shaun Finch joined us this year to provide a valuable extra pair of eyes and ears out on track. It’s been good to see his and Michael’s relationship develop, which has improved the quality of officiating as the season has gone on.

Sarah Darlow has been our discovery of the year. Who knew a grid marshal can have such a positive impact on the running of a race meeting? She’s been fantastic at every event she’s worked at, and we know everyone appreciates her contribution.

Thank you to Keith Ramsbottom, our scrutineer, meticulous always and being able to rely on him has made our lives as organisers that little bit easier. Having to deal with 3 championships, each with their own rule book is a big challenge.

Gaz Bury has also come on board to help give both NKC and our drivers more coverage across social media and beyond. He’s doing a great job in building excitement around the championship and long may it continue.

Thank you to our timekeepers, Lauryn Harrington-Carter and Blair Mollison. They perform a difficult job that requires long periods of concentration and is an essential part of keeping the events running.

And finally, thank you to Ian and Sue Mayman for providing the NKC drivers with free photographs all season. Ian and Sue have become bit of a fixture at NKC meetings. Originally they came along just to support their friends racing in TKM but now they can be found somewhere around the track in all conditions with a camera in hand ready to capture shots of us all.

We now look forward to seeing you all at Clay Pigeon to celebrate the end of the season where we’ll see Britain’s finest TKM and Rotax grids in action. Hopefully you’re all chomping at the bit to register for next season, plans are close to being finalised and we can’t wait to share them with you.

About the Author: oli