After what felt like a long, cold eternity, race day 1 was finally upon us! We woke to the ear shattering 100UK engines tear up the hill for the first time on Friday practice and WOW was it great to be back. The bustling paddock of some 500 people was alive once again!

NKC has made alterations this year with drop down nose cones being introduced for all Rotax classes. Qualifying has been ditched in favour of an extra heat with each driver getting a front, middle and back starting slot over the course of the day but probably the most exciting news we have is that we are joined by Joe Bradley and Nick Daman of Karting Live.tv. The pair are commentating on our entire season with a live stream on Youtube! Excellent stuff! 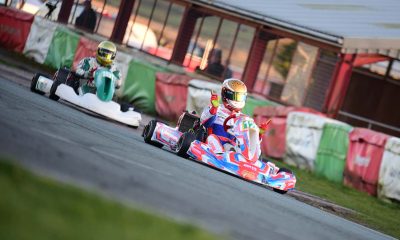 Whilst some cast doubts over the new format, it goes without saying that it worked a treat all day! We were witness to some extraordinary racing all the way down the pecking order and also some text book driving by some super talented drivers. The day started with Myles Barthorpe utterly decimating the Senior Rotax field by winning heat 1 by a scarcely believable 11.8 seconds! That certainly raised a few eyebrows amongst the paddock. A repeat performance was off the cards as gremlins shortened his dominance but he none the less showcased why he represented Britain with sterling drives back through the field later on. Last years’ top boys Tom Storrar and Si Keeble featured only fleetingly as the day belonged to Lewis Jones who was troubling the front all day long and bagged a brilliant win by a clear 5 seconds come the end. Elsewhere, battles raged all day in Rotax 177 with Louis Large and Phil Haworth going toe to toe when they met in heats. Ben Hitch added spice to the mix and the 3 of them lit up the class with some great overtakes and close racing. Trading places until the very last, it was Louis Large that came out on top in the final with a superb drive. Last years’ runners up Karl Bryant and Alfie Williams had a rather subdued day with Karl bagging the B final victory and Alfie unfortunately having to sit out the B final due to injury. Get well soon Alfie. Not a fantastic start to 2022 but Karl left with a 14th from 31st on the grid in the A final. No mean feat that!

Our 2 new Junior categories of Rotax and Mini Max showed us the up and comers in motorsport and with so many having little experience racing, they put on a great show! The day was dominated by the battles of Braden Hill, Ronnie Shrimpton and Archie Buttle. The battles between them had us in suspense as to who would take top honours. This time round it was Braden Hill who came out on top with a superb drive in the final to claim victory. The future of Rotax looks like it’s in safe hands. Mini Max gave us an insight into the rest of the season with Alex Frazer taking the seizing advantage and grabbing 2 heat wins and taking the final in fine style. Whilst only fielding 6 runners, this is the first time for some of the competitors in a Mini Max and they did a great job to be close to the leaders throughout the day! 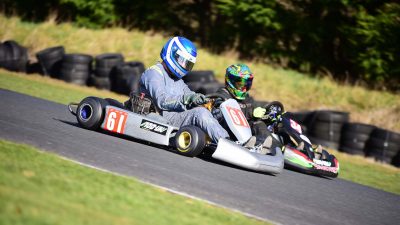 For the first time, 100UK has been incorporated into the NKC and it didn’t disappoint! We saw absolute fire from the likes of Jamie Crease, Glenn Reyland and Ed Pead who lit up the show with unbelievable hauls through the pack to get to the front. The day ultimately belonged to Jamie who at one point, made 7 positions in one lap to take the lead! A demonstration drive all day, he earned himself driver of the day with an exquisite performance from heat 1 to the final. Few ran him close but those that did were on par with him when they could match his display. In TKM, was saw a familiar grid from last season and we weren’t disappointed from the off! 2021’s boss man Louis Beaven had set backs all day. Broken and borrowed engines weren’t enough to slow him down one dot as he recovered from his woes and with intelligent driving he arrived at the leaders with a handful of laps to go. Carefully watching the dicing duo of Jake Campbell-Mills and Mitchell Ball squabble for the lead, Louis swooped to go from 3rd to 1st in only a couple of corners with some brilliant tactical driving to snatch the victory!

Save of the day!

We have 2 to celebrate. The first goes to Jack Goodyer who completed a beautiful pirouette at the top of the hill. All captured by our photographer, Glynn Bury, in fine style. Few manage to save that type of off with the barrier so close so it’s worth a mention! The other goes to Louis Beaven who despite his troubles, never gave up and bagged himself the GYG win in TKM.

So there you have it, weekend number 1 in the books. We turn our attentions to Clay Pigeon Speedway on the 2nd and 3rd of April. Its curving turn 1 offers daring overtakes and coupled with it hairpin and flowing latter section, make this a demanding place to race. So let’s gear up and go, for round 2 of the NKC!