Our most Southerly circuit this season had us down in pleasant Dorset at Clay Pigeon. The weather was better than our last visit with the sun beaming over the circuit for Sunday’s action, coupled with a bitterly cold wind. Being such a short lap here, every second counts when trying to plough through the field and couple that with the format of mixed grids and its notoriety for overtaking, its makes it all the more important to be decisive with moves! 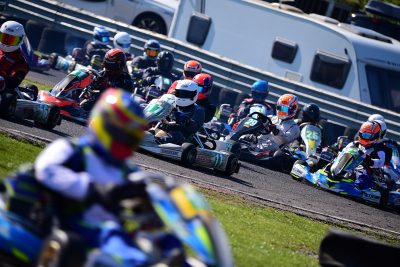 The mixed grid format took effect in Senior Rotax with a day dominated by breakaway winners in the heats. We had a first ever heat win for the young Elis Humfryes who was able to shrug off Paul Ozanne closing in, a dominant display by Tom Storrar with a win of a little over 10 seconds, Lewis Jones picking up where he left off at GYG and George Walker bagging the top spot in heat 4. Heading to the A final, Myles Barthorpe jumped into the lead from 6th and rocketed away to win in great style, but it was the battle for 4th that had us glued to the race! A superb defensive display by an unflustered Lewis Jones held off Tom Storrar and his pursuers to just about take it by half a kart’s length. Over in the 177 Rotax class, a standout performance by Zack Bolton in heat 5 to lead half the race was an incredible achievement. A rugby player on the other weekends, Zack readily admits he’s over the 177 weight and to hold off the likes of Louis Large, Ben Hitch and Oliver Smith for so long was an outstanding performance. A day dominated by Louis Large and Phil Haworth set us up for what could be a spectacular final! To get to the front, Louis had to pick his way from 7th and as Clay has already shown, it’s not easy to pass here and a 6th place finish it was to be at the flag. Phil Haworth, with the advantage of pole, quite simply made the best of the clear track and waltzed is way into an unassailable lead to win by 6 seconds ahead of Oliver Smith and Joe Pfiffner, who collected their best finishes this season with 2nd and 3rd. 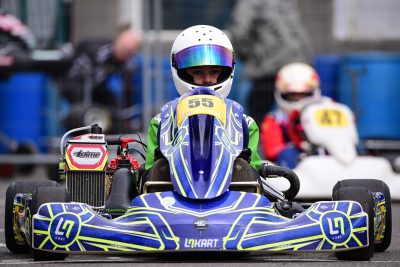 Our fearless pack of Junior Rotax gave us some hair-raising action as there were moves galore throughout the day. The most proficient overtakers were Sam Wyatt, Ronnie Shrimpton and Mason Perren, who made huge inroads from their grid slots during the heats to get up to the podium positions. The day ultimately belonged to Team Clay’s Finn Smith who dominated heat 3 by 10 seconds and followed it up with another textbook drive to win the final by some 5 seconds, ahead of Sam Wyatt. The battle for 3rd raged on as no less than 7 drivers were in contention for it! A fantastic scrap with sticker kits being traded occasionally, ultimately Ashton French held on to 3rd and thus closed the gap in the championship to the leader Braden Hill, who had a tough weekend but picked up a solid 6th despite the troubles. A wild start to the day for Alex Frazer in Minimax had him ditch heat 1 after helping himself off at turn 1 on lap 1 and then shorten his hunt for a heat win after an excursion across the kerb on the exit of the chicane whilst chasing down Eric Smith in heat 3. Ever resurgent though he dug in and picked up a fine 2nd place in the final despite crossing the line with a bumper penalty! The overall winner was Finn Smith who kept himself out of trouble all day and completed a calm drive to take his maiden win in NKC. The 100UK Juniors joined us for the first time and Hayden Taylor came home ahead of Yelena Osbahr-Scott to take the first top honours of the season. We hope to see this field grow more as the year progresses. 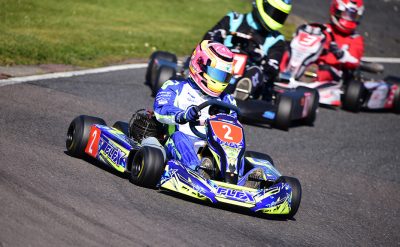 As ever, the 100UK grid was drama aplenty! Marcus Gray had a frightening spin in the front of the pack heading into turn 1 that had us all holding our breath! Thankfully, nobody was hurt as karts bumped into one another. Liam Hamling gave us a scare in heat 3 whilst trying to restart his kart as the pack loomed and passed him at turn 1, Billy’s Blind. A close call with wheels just missing him! More drama unfolded with a move by Scott Williams diving under Ben Clucas into 1 and Wes Graves taking air over Scott’s front tyre at the same time in a bid to take them both! With all parties coming out unscathed, Wes set off in pursuit to swap with Marcus Dorey and win heat 3. Continuing his performance into the final, Wes simply decimated the field with a lights to flag victory with a win of some 9 seconds!

TKM Senior was dominated by the battles of Mitchell Ball And Jake Campbell-Mills. 2 wins for Mitchell and 1 for Jake had them both lock out the front row for the final and set up a battle of the giants. A coolly defensive display let Ball control the field nicely ahead of Calan Lamont and the ever present Louis Beaven. A couple of feint attacks by Campbell-Mills got him nowhere as Ball continued to lead the way seemingly untroubled. Heading into the final lap, a do or die effort by Cambell-Mills sent both Ball and himself down the order! Lamont who’d watched it unfold duly slipped up the inside of the recovering duo to seize the lead and take his first victory! A slightly out of touch Louis Beaven also capitalised and grabbed 2nd to help extend his championship lead. Jake Campbell-Mills and Mitchell Ball came home in 3rd and 4th respectively.

Save of the day!

Alex Frazer definitely takes this one after a wild weekend! A huge off in heat 1, a monumental spin over the kerb and even a dropped nose cone were simply not enough to stop him taking a 2nd overall in Minimax.

The Alfano driver of the day award went to Eric Smith of the Minimax class who showed vast improvement from GYG to take a class win and run at the front all day.

So, there we go! Runaway winners and defensive prowess dominated the racing for the most part but now it’s time to turn our attentions to the most Northern leg of the season as we head upwards to the mighty Rowrah!