As we rolled over into September, we packed our bags and turned our attentions over to the long haul to Wales and more specifically, the almighty Glan-Y-Gors circuit! Revered throughout the nation as one of the best, it will test even the bravest! With its long straight up the hill, super-fast blind turn 2, cascading technical right lefts, reminiscent of Laguna Seca’s corkscrew, this place really does have it all! Graced with superb weather for race day, we looked forward to some closely fought racing. So, let’s get stuck in! 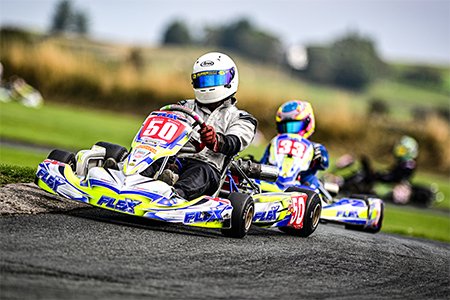 Early morning mist dissipated quickly for the first NKC action, TKM Extreme. Pace setter in Qualifying was Rob Wallace with a superb lap, 1 quarter of a second up on Mitchell Ball! Seeming to have it in the bag with such a great lap, it was ousted by an unbelievable time by Louis Beavan, who found yet another quarter of a second to top it!

Heat 1 saw Louis Beavan and Rob Wallace surge into the lead from the off. Shadowing the whole way, Rob was no more than a couple of kart lengths behind throughout until the chequered fell.  Heat 2 had them yet again storm into the distance but this time though, Rob led from Louis, who didn’t give him a break at all! Taking no chances, Rob covered off the inside at the last corner to close off the heat. A slower exit meant letting Louis in for a photo finish, losing out only by 1 tenth of a second! 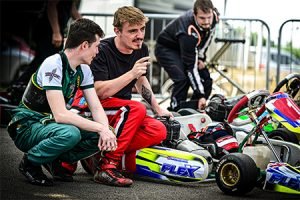 Tensions were high as the 2 pace setters from earlier went at it one more time. Louis Beavan was shuffled back from 2nd to 4th and had to pull out all the stops to work his way back up to Rob, who was leading. Finding a way past 2 of the hardest chargers, Mitchell Ball and Lucas Sullivan is no mean feat either! Using every ounce of talent to fend off a resurgent Louis, he held on until lap 6, where he eventually fought his way by, a move which would come back to haunt him. Brake failure finally put pay to Robs day and the chase was taken up by Mitchell. Chipping away the 4 second deficit, time wasn’t on his side and Louis held on to take the flag first on the road. Mitchell came home second with Lucas a fine 3rd after holding off Mathew Harris. Post-race, controversy reigned. Louis’ move to take the lead happened under Yellow. He incurred a 10 second penalty for the infringement, dropping him to 11th overall but, we can’t deny, it was one hell of a display by him all day! 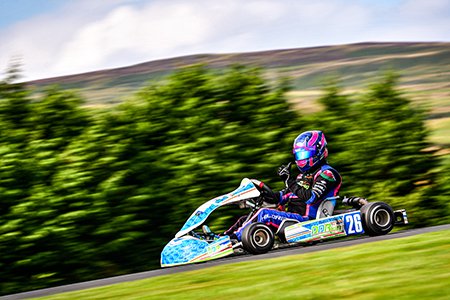 Shooting out the blocks with gusto, Matt Hildred bagged pole position for his home race and was never headed. A Dynamic performance from him to say the least, considering only 45 minutes prior to this, his Kart Republic chassis was being welded after a crack was found following the conclusion of Saturdays practice! Harry Wainwright lined up alongside for the first go around.

Heat 1 gave us a clean get away and saw all the protagonists race up the hill to turn 2, where Milton Steele-Vaessen was shown the grass on the way out. Matt took off like a shot and gapped Elliot Picard in second. Managing it to the end, he claimed heat 1, with Elliot holding second from a squabbling duo of Harry Wainwright and Tom Storrar. Heat 2 gave us an almost identical race, with Matt wandering off into the distance, but this time his chasers were Tom Storrar who’d finally bested Harry and they came home 2nd and 3rd. 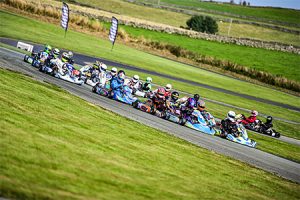 Looking for the clean sweep, Matt just had to repeat his earlier performance to claim maximum points for the weekend. With an excellent start, it was Tom who led into 1 and up the hill for the first chase! Heading into turn 3 Harry sent it up the inside off Matt and they clashed, both sent spinning down the track and out of contention. Si Keeble and Elliot found themselves up the order and looked to chase down Tom. Racing towards the closing stages, confusion between the leaders saw Tom slide down the order to 5th with Elliot leading and Milton chasing, trouble was brewing though. As the flag fell, it was Elliot Picard claiming his first win followed home by Milton Steele-Vaessen and Si Keeble who had quietly watched and capitalised well. After the Final, Elliot was handed a penalty of 5 seconds for gaining an unfair advantage. He dropped to 7th but I’m sure Milton isn’t worried after being nowhere all day, to claim the win with Si Keeble 2nd and Tom Radburn, a well-earned podium, in 3rd.

Aiming for a hattrick of poles on the bounce, Adam Haines had some work to do in qualifying if he was to secure it! The pole switched hands multiple times throughout and it looked to be his until a last-ditch effort by Andy Gosling just pipped it in the last minutes! the top 6 were covered by just 1 quarter of a second!

Heat 1 and the only movers and shakers early on were Karl Bryant and Jack Goodyer, who turned the leading trio into a quintet. Unhappy with second, Adam executed a move for the lead, which saw him soldier off into a commanding lead and take the chequered flag. Heat 2 started with a bang, as pole sitter Adam lost out to both Andy and Karl Bryant at the start. Karl could do nothing but shadow Andy in the opening stages until Adam finally pulled the pin and overtook them both to regain the lead. Across the line the leading 3 had opened up a 5 second gap to 4th, such was their pace! 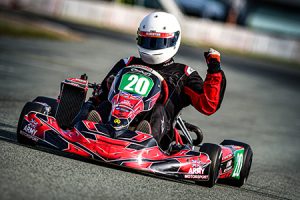 A daunting task lay ahead for Adam, with a 12 minute final and 2 super-fast drivers on his tail. The lights went out and as they disappeared up the hill out of sight for the last time, it became clear it was again going to be a 3 horse race at the front. The trio pulled half a second a lap over the chasing pack, led by Jack Goodyer in 4th! Andy Gosling made his move for second and quickly gapped Karl, who needed every point he could get to aid his own championship challenge. Try as Andy may, the gap to the leader only waned slightly throughout, a tenth here, a tenth there. An undeterred Adam, who had gone like a rocket all day, was unflappable and managed to extend his margin to a little over a second as he negotiated the last corner and took victory for the 3rd time that day. An impressive weekend for his first year back in a kart since 2019. Andy brought it home second for his first race in the NKC and Karl, a distant 3rd, to round out the podium.

Paul Monks, who races in 100UK has been an asset to our paddock by giving up some of his own time to help out the community with his welder! I have no doubt that Matt Hildred and Rob Wallace are eternally grateful for him being there to keep us on the circuit. Thanks Paul!

The weekend has been some of the best racing we’ve seen so far this year. Gorgeous weather on Sunday really made it feel as if the height of summer was upon us once more. Next time out, we head off to the second Welsh round of the season at Llandow. Its technical layout makes this one of the toughest circuits to get right. See you there!

Many thanks to Stu Stretton Photography for the fantastic photos.