The first leg of the October double-header took us back across the border to Wales and to the South coast. Llandow’s characteristic layout is made up of tight, twisty complexes, very little run off and a hairpin bend that is intimidating enough to make your left foot have a mind of its own! Add in the typical local weather system and you get a recipe for one of the most challenging weekends on the calendar!

Sunday morning gave way to what we feared, rain. Wildcard entry and local hero, Sam Johns, stormed into pole early on and lapped nearly 2 tenths faster than championship contender Mitchell Ball using his local knowledge to his advantage. With the title in his sights, Louis Beaven lined up a solid 4th.

As the field piled into the lake that’d formed at turn 1, keeping out of trouble was key for Louis today, then it happened. He’s off! Facing the wrong way at turn 6, he had a mountain to climb. Scything through the pack, he climbed from 18th to 10th in just 7 minutes! At the front, a fine display of control saw Sam Johns take the opening race with Mitch Ball a distant 2nd and Matt Haughton 3rd. Heat 2 offered little in terms of better weather and Sam utilised his talents and walked off into a 5 second lead at the flag. Mitchell and Matt took their 2nd podiums of the day and a good chunk of points. Louis Beaven managed to climb to 5th to minimise the points loss. Further down, an impressive display by Joe Phillips to claw his way through the pack from last back to 11th after a spin on lap 1 from 5th sent him to the back!

Finally, the sun came out and the debate was over which tyre to be on! On the opening lap Matt Haughton lost the possibility of another podium after an incident on the greasy track with Matthew Harris judged to be at fault. A fantastic dice between 4 karts battling for 5th drew everybody in as Josef Jaques got the better of Lucas Sullivan in the dying laps to take it ahead of Curtis Grainger and the resurgent Joe Phillips. The unfortunate Lucas Sullivan, who had held on for so long, was shuffled down to 8th at the line. At the front it was Sam Johns who lead the field home with a commanding victory and the perfect weekend with pole and 3 wins. Try as Mitch Ball did, he couldn’t quite best him but he did take a few points of Louis Beaven in the championship who in turn came home 3rd after an intense battle with Matthew Harris all race long! Harris’ move early on incurred him a 5 second penalty but such was the rapid pace at the front, he still managed to retain 4th! 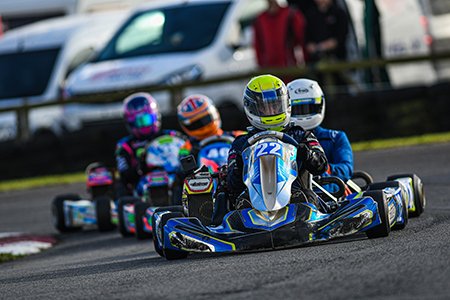 Conditions didn’t improve since the TKM qualifying so it was again all about control and consistency. Championship contender Si Keeble had to make the most of his home advantage to try and best Tom Storrar and Harry Wainwright. Never headed from his first lap, Keeble delivered and took pole by 2 tenths from an impressive Ari Barker. Championship contenders, Storrar and Wainwright, lined up 4th and 9th respectively.

Getting underway Elliott Picard jumped Ari Barker at the start and followed Si Keeble through after one lap. Controlling the race from the front, disaster struck! Snatching defeat from the jaws of victory, Keeble retired with a fuelling issue from the lead. Picard took up the reins and brought it home for his first win this season. A superb drive by Barker got him a fine second with Championship leader, Storrar, taking 3rd. Ari’s ascendancy halted in heat 2 after a spin sent him down the order to the back. Local boy Jack Jones, starting 10th, had a solid drive. Picking his way through the front runners, he came home to grab the win.

Sunshine and slicks! Despite a light smattering of rain pre race, it wasn’t in debate however much the threat loomed. Launching into a strong lead, Jack Jones had the measure of Elis Humfryes and gapped him at nearly a second a lap. Elis was having a sensational drive and was in contention for his first podium. He hung onto 2nd as long as he could before a late surge by Tom Radburn saw him demoted to 3rd. The second event in a row where we’ve seen Tom up at the front. Mid race Si Keeble had closed down on Matt Hildred who was in a strong 5th position. Hoping to keep his own chances of 3rd in the championship, they battled hard. Going side by side down the straight to the chicane, they came together with Matt spinning off into the grass whilst Keeble managed to keep it pointing in the right direction. Keeble brought it home 6th, just behind Ari Barker who had climbed through the field and capitalised on the action in front. A fine display by Jack Jones got him over the line just a little over 7 seconds from Tom Radburn and Elis Humfryes. 3 Drivers on top who had excelled all day. Storrar finished 4th and keeps a very slim lead over Keeble in the title race.

Karl Bryant made all the right noises and took pole straight out of the box with a fantastic lap which was never headed. Anwar Beroual-Smith lined up 2nd for his first front row start since round 1 with Michael Mallet 3rd and champion elect Adam Haines, 4th.

With rain still falling, Heat 1 was a washout and Mark Rowe exited stage left and hit the wall hard. Thankfully he was ok but with conditions not improving, the red flag was thrown and the 6 lap sprint was taken by Bryant with  Beroual-Smith and a hard charging Haines close behind. Heat 2 went off with a bang and Haines straight away got himself onto the back of Bryant. Nipping at the heels all race long Bryant pulled some questionable defensive moves off to make it hard work for Haines to get alongside. The occasional excursion to the grass kept him behind until the flag. An intense battle that was spectacular to watch. The final was going to be a belter. 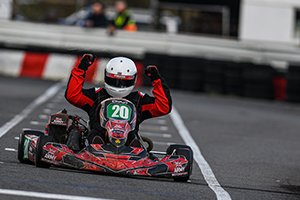 Wet suits were packed away as the field was presented with a near bone dry circuit for the final. Bryant’s wet weather pace wasn’t transferable to the dry track and capitalising on a slower pace, Alfie Williams stole 2nd from Haines! Red mist firmly still on, Haines reacted quickly and retook it as soon as was feasible. Knowing Williams was on the case, he made a superb dive for the lead and took it after some tight wheel to wheel action. From there on in, Haines took an unassailable lead and Williams swapped 3rd for 2nd mid distance. Mid pack drama was unfolding with 5 drivers battling for 7th. Tyler Fossey, starting 15th, picked his way through and held them all off. Clinging to 7th as hard as he could, the smallest error would be punished. It became 10th in one lap but irrespective, Tyler should be very happy with that performance. At the fall of the chequered flag, Adam Haines crossed the line 5 seconds clear of Alfie Williams who in turn had 2 seconds on Karl Bryant. A resourceful Mark Rowe took a well earned 4th after his heat 1 off but ran out of time for the last podium spot.

There were so many fantastic displays of kart control this weekend it’s hard to pick just one highlight but I think we can all agree on this one… Without doubt a round of applause to all that helped clear water from the circuit to aid the continuation of the event. Not knowing if it was to rain again, you did it anyway and that contribution was far and above the racing itself. Thank you to you all. And thanks to the officials who stood out in the rain for two days running ensuring that the race meeting could go ahead, we literally could not do it without you.

So there we are, biblical levels of rain, best finishes for a few and some ultra tight racing! Yet again Llandow has delivered high drama! Next time out we head to Clay Pigeon and the final round of the year. 3 Championships up for grabs, nobody can afford to miss a beat! So lets go!

Many thanks to Josh East and Stu Stretton (Stu Stretton Photography) for the fantastic photos.