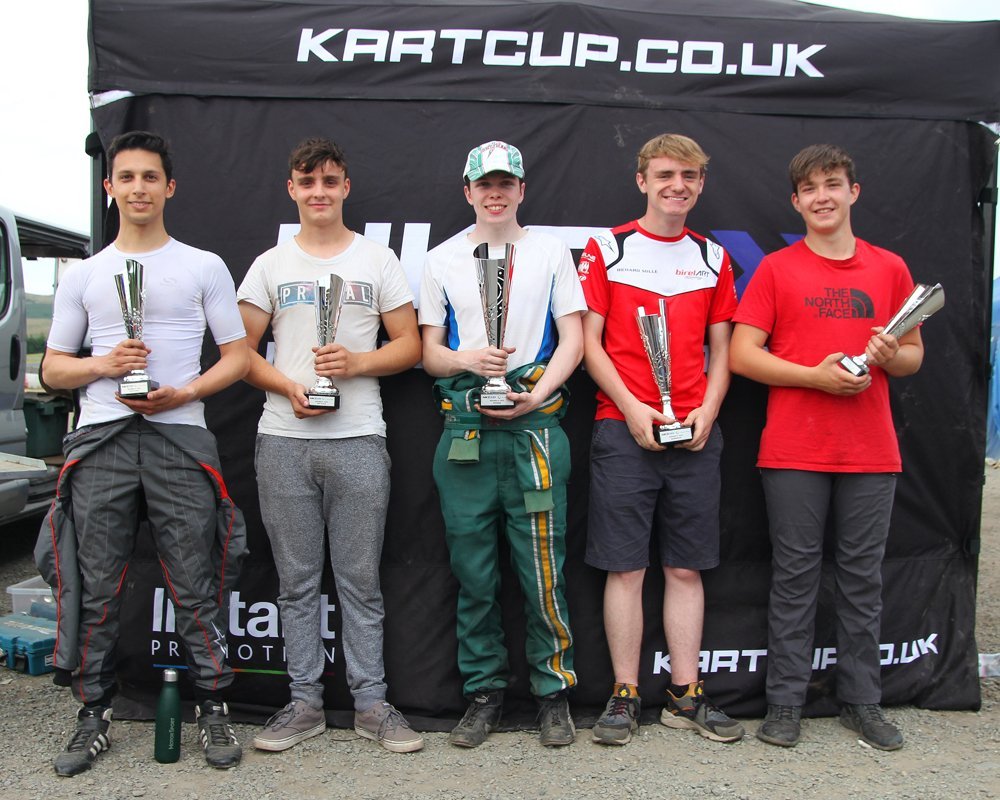 National Kart Cup descended on GYG in North Wales for Round 5 of the championship and final round of the Northern Cup. Another new track for a lot of the drivers but there could be no complaints, from the stunning scenery and glorious weather to the fantastic facilities (there’s a shower!) and a great track. It soon became apparent that the heat was going to play a factor with everyone getting progressively slower over the course of practice on Saturday as the tyres, engines and drivers struggled in the near 30 degree heat. After six sessions, most drivers had had enough and retired to the paddock to watch the football and be subjected to tequila shots courtesy of Meg, who was celebrating her birthday. The NKC boules tournament ran late in to the night.

Conditions on race day were near identical to the Saturday. Heat 1 saw Meg on pole who took a lights to flag victory. Lucas Sullivan showed us what he was capable of, making up 8 places and Mitchell Ball, who started last, ended up 8th after making up 12 places. Joel Fothergill was unlucky in spinning out while going for a move on Sam Wilson but he showed great pace setting the fastest lap of the race.

Lucas stormed to victory from 2nd on the grid in Heat 2, with a 2 second lead over Alfie Mellor, who made up 12 places to come 2nd and set the fastest lap. Mitchell and Joel ended up 3rd and 4th respectively, both also making up multiple places. Jake suffered the first of his DNFs in Heat 2, which would ultimately cause him to lose the Northern Cup.

Oli Nitch-Smith started pole for Heat 3 with Mitchell alongside. Mitchell got the lead at the first corner and drove away taking the win with Oli managing to hold on for 2nd with Sam Wilson in 3rd. Lucas again made huge strides through the pack moving up 13 places. Meg was another strong mover going from 19th to 8th. The final grid was decided with Lucas on pole and Mitchell alongside. These two ended up in an intense battle throughout the race both setting the fastest lap of the race, with Lucas eventually coming out the victor. There was hard racing in the following pack behind. Sam Wilson made up one place to come 3rd with Joel (who had to start back in 8th and seems to be getting faster and faster every meeting) 4th. Alfie rounded out the podium. Jake who had been beset by bad luck had a very impressive race and managed to get through to 7th from 15th on the grid and was a deserving winner of the SJM Driver of the Day. Ultimately, it still wasn’t enough to make up for the DNFs earlier in the day, so Alfie Mellor took the Northern Cup by 6 points over Jake.

As always, thanks to all the drivers, friends and families who make NKC what it is. Thanks also to the BKC for hosting us for the first five rounds who have been excellent.

The final round at Clay is on the 3-4 August (remember that practice is on the Friday and race day is on the Saturday). Sam Wilson currently has a very slim 3 point lead after dropped scores so anything can happen. The top 10 drivers will also be seeded for 2019 so lots to race for. It’s coming home..