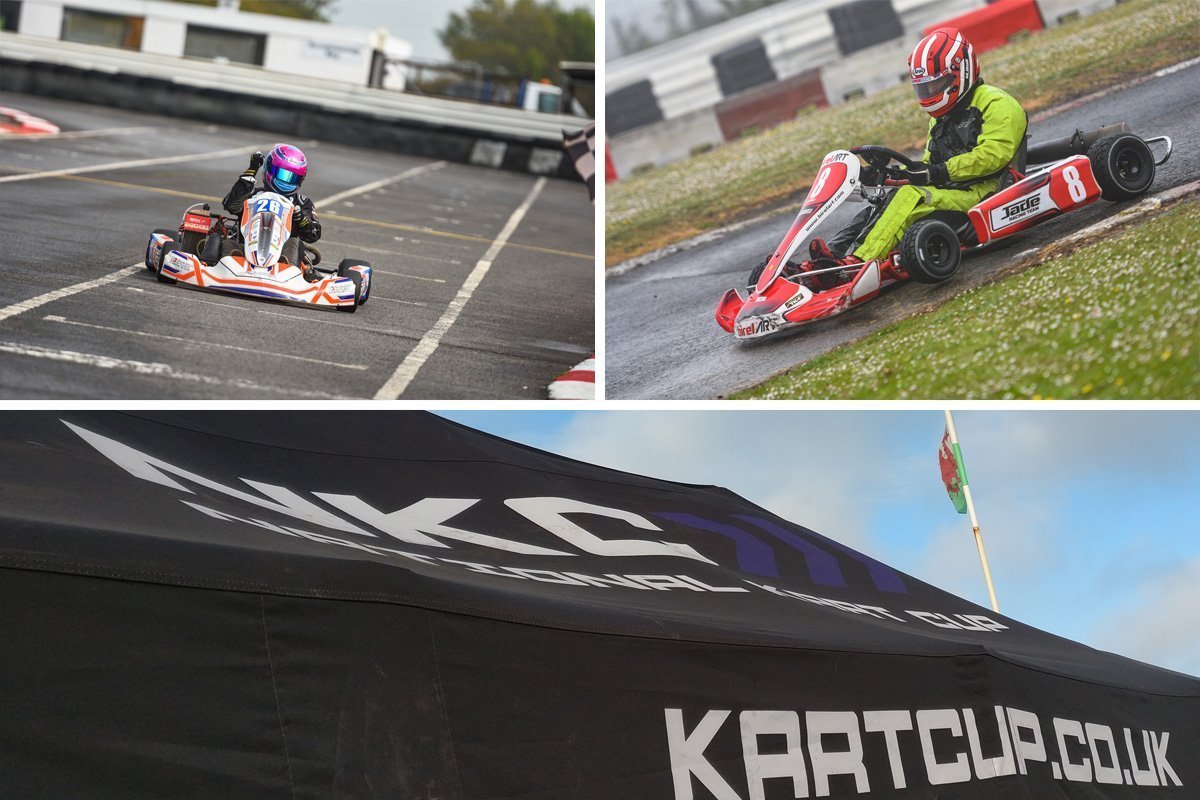 Talk of how little use our wet tyres had seen over the preceding two and a bit seasons did its job. Rain was on its way, but not before a lovely (albeit pointless from a testing point of view) practice day. How was a wet track going to affect the shape of the grids and what impact would this have on the outcome of the Southern Cup?

That’s right, Round 3 marked the half-way point of the season and the climax of the Southern Cup. Who would have thought grown up boys would get this excited about what is apparently a much-coveted piece of silverware? After taking over a week to sort out the tables after Round 2, were we really to be trusted to crown the correct champions with only 30 minutes to add up the scores? So many questions, so much pressure, what could possibly go wrong?

Perfect conditions for karting, great company and a much-appreciated opportunity for Oli and I to have our first ever drive of a Rotax. OK, we have to admit they’re not completely terrible to drive and I did trounce him, although he’s full of excuses of course. He got his own back later when he decided to take our game of Boules a little too seriously though. Thanks again Gez and Matt for trusting us with their karts.

Testing performance was largely academic though with rain forecast for Sunday. If only we had F1 resources so we could soak the track!

And so it came, that rain that gets you wet along with gusty wind. How many people asked us what pressures to run the wet tyres at, only to be disappointed to find we had no clue (and still don’t)?

The order was well and truly shaken up in both classes. In TKM Pete Newman demonstrated he had a healthy advantage here in these conditions, with Louis Beavan his nearest rival. Championship leader Mitchell Ball was struggling and only managed 7th.

Rotax championship leader, Matt Hildred also got a shock, coming in in 6th place and almost a second off the pace of his rivals. This wasn’t going to be the cruise to the Southern Cup he was hoping for. The top 5 was tight, with Milton Steele-Vaessen narrowly claiming pole ahead of Simon Keeble.

Pete Newman’s lap time advantage had stretched further, enabling a simple lights to flag TKM win. Lucas Sullivan nabbed 2nd early on and pulled away from those behind. The race for 3rd between Louis Beavan, Matty Ayres and Ryan Edwards was tighter, but Ayres took it following a move on Beavan on the last lap. Mitchell Ball’s struggles were getting worse as engine troubles sent him tumbling back through the field, but he managed to bring it home in 12th.

Simon Keeble stole a march on Milton Steele-Vaessen on lap 1 of the Rotax heat. He held the lead until lap 8 when Milton was able to slip past. These two continued to fight until the end and were separated by less than 3 tenths at the finish. Aled Davies had a lonely race but managed a solid 3rd place. Further back Matt Hildred could see the Southern Cup slipping away as his points lead was being eroded. He managed to finish 6th but was still a whole second off the pace of the leaders.

Another simple drive to the TKM win for Pete Newman as the chasing pack were showing no sign of overcoming his pace advantage. The race for 2nd was closer, with Lucas Sullivan again claiming it ahead of Matty Ayres. Mitchell Ball was back on form and made up 6 places to claim some valuable points, but he was going to need more if he was going to claim the Southern Cup.

Further back Chris and Oli had a bit of fun, swapping places a couple of times to finish 9th and 10th respectively and Steve King made up 4 places to finish 14th.

Simon and Milton continued their fight at the front in Rotax, with almost identical fastest lap times. It was looking like the Southern Cup was going to one of these two. Matt Hildred climbed up to 4th, behind Tom Richards, but his points lead was now gone and he was still some way off the pace of the front two.

Much to the dismay of some and joy of others, the rain had stopped and there were dry patches on the track surface. Not dry enough for the TKMs to consider a switch to slicks though and this was going to be all about who could get the pressures right and stop their tyres from overheating.

Pete Newman led the way early but now there was a challenge to his lead in the form of a resurgent Louis Beavan. Mitchell Ball was on the pace and was doing his best to pick up as many points as possible. It was coming down to just 1 or 2 points being the difference between Southern Cup glory and an empty space on the trophy shelf.

Oli had his pressures right and was on great pace, chasing down Curtis Grainger and Ryan Edwards. Ryan looked to have his pressures too high and was clearly struggling in the closing few laps. Oli was surely going to pounce on the last lap but hit a kerb too hard and smashed off his chain.

Back at the front Louis was applying pressure and Pete was holding on. In the end Pete just about managed to get over the line in first, only to find himself underweight in post-race scrutineering. This meant Louis claimed victory, with Lucas Sullivan in 2nd and Matty Ayres 3rd. Mitchell Ball took 4th and Ryan Edwards managed to hold on to 5th as well as victory in TKM160.

In the end Pete’s misfortune meant Mitchell’s claim over the Southern Cup looks a lot more comfortable than it really was, taking it by 17 points. Small moments make big differences though and it could have been very different. Congratulations Mitchell, this was a great achievement against high class opposition at the front of the TKM grid. Ryan Edwards having dominated the TKM160 class over the opening three rounds took the TKM160 Southern Cup.

The Rotax drivers lined up and all but one of them was on slicks. It wasn’t Rhys Llewellyn’s day, racing alone in the 177 class after a few drivers failed to make the meeting and now he was surely on the wrong tyres.

Matt Hildred knew from testing that Milton and Simon also had good dry pace. The chances of him overcoming their leads and hauling himself back to the top of the table were slim, but there was at least a chance now, where there had been none before. This was a cruel twist of fate for those guys, who previously only had to worry about each other, but now had Hildred to contend with. The track still had damp patches as the race began and Matt quickly moved up to 3rd, with the front 2 in his sights.

It was looking like Milton and Simon had him covered though. Their pace was solid and Milton was looking comfortable in the lead. That all changed when he made a mistake on lap 5, running wide and dropping to 4th. Milton was still top of the table as it stood, but a win for Matt would see him leapfrog to Southern Cup glory. Game on.

Sure enough the gap to Simon Keeble was coming down, rapidly now and Matt made his move on lap 7. He quickly built a small gap and held it there for several laps. Simon hadn’t given up though and with a few laps to go the gap was coming back down. In the mean-time, Milton had gotten past Tom Richards to move back into 3rd, but was too far back to make any impression on the front two.

Matt steadied himself and was able to maintain the gap back to Simon to take the win and a stunning Southern Cup, pumping his fists like Nigel Farage as he crossed the line. This was a result that looked almost impossible an hour earlier. Tom Richards finished a solid 4th and the top 5 was rounded out by Gez Owen, who deserved this strong finish after some poor luck in the previous rounds. Rhys Llewellyn won the Rotax 177 trophy. The weather had played its part and dealt a cruel blow to Milton’s chances of Southern Cup victory. Congratulations to Matt Hildred, this was well deserved following great performances over the 3 rounds. An absent Mike Gamble was also crowned Rotax177 Southern Cup champion.

The Hilary’s Kitchen fastest lap winners were Louis Beavan in TKM and Matt Hildred in Rotax, each receiving a £25 cash prize.

Thank you to everyone who has taken part in the first half of the 2019 NKC season. We hope you’ve enjoyed it as much as we have as we look forward to the 2nd half and the prestigious Northern Cup.

Thank you to Darren Beavers and BKC for putting on yet another flawless meeting and to South Wales Karting Centre for hosting the event. Thank you also to JC and the ever-present Phil Smith for carrying out their scrutineering duties and helping us with various issues.

Thank you to Ian and Sue Mayman for providing wonderful photo’s free of charge. We’re sure everyone appreciates this.

Thanks as always to our title sponsor Klima-Therm UK.

We hope to see as many of you as possible at Hooton Park for Round 4 on June 29th and 30th.

Championship tables have been updated and can be found here.

Entries to round 4 at Hooton Park are now open.