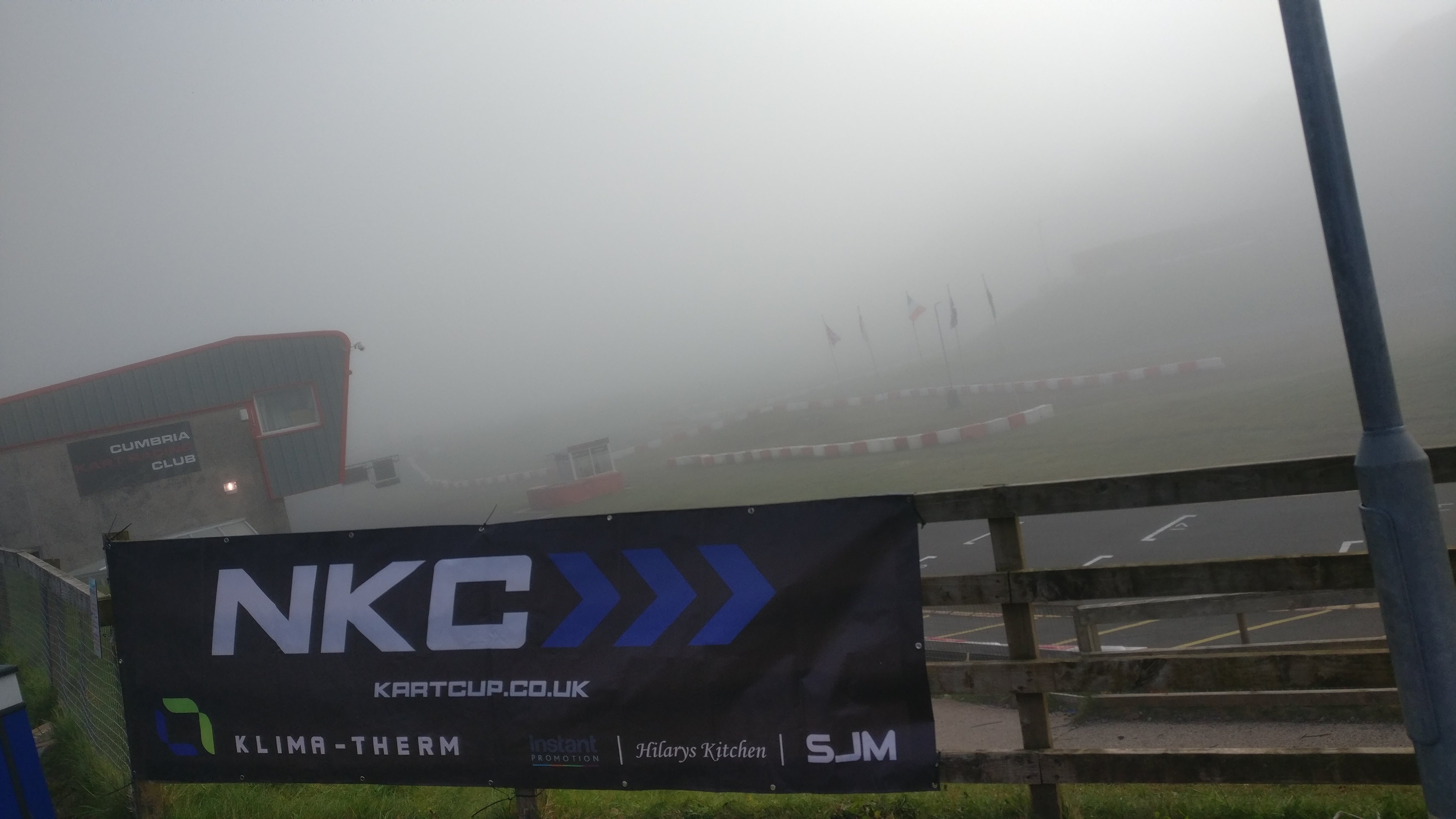 An almost unanimous vote taken in the bar at Clay Pigeon just before the final round of NKC 2017, between a few well-oiled drivers, decided that we’d be heading to Rowrah in 2018. We’d heard good things about the place but it exceeded all our expectations. The setting, the facilities, the weather, the track, the downhill push start – it’s got to be up there with one of the best kart circuits in the country.

Testing went well for most on Saturday in windy but dry conditions. Jim’s weekend didn’t start so well, unlike his kart which fired instantly and decided it was better off without him, took itself off down the track and in to the barriers! After an enjoyable evening around the NKC BBQ and a few beers, we woke up to a misty track but the sun soon burnt through leaving us with glorious conditions for the day’s racing.

Heat 1 saw most of the favourites starting towards the back of the mixed grid. Jake Horan quickly made his way to the front from grid 4 and was able to pull away from the pack. Sam Wilson fought his way through the field from 13th on the grid to finish 2nd setting the fastest lap of the meeting and only 1.4 seconds behind Jake. Alfie Mellor rounded up the top 3 having started in 11th.

Heat 2 was won in dominant style by Sam Wilson who ended up almost 6 seconds up the road. There were familiar faces down the road with Mitchell Ball, Jake and Alfie taking 2nd, 3rd and 4th respectively. Notably, Rob Cox was only a little over a second behind and set the third fastest lap of the race.

Sam Wilson had to work a little harder to win Heat 3, winning by a margin of only 0.41 seconds. Once again, Mitchell, Jake and Alfie took 2nd, 3rd and 4th respectively. The final grid was decided with Sam on pole, Jake 2nd, Mitchell 3rd, Alfie 4th, Rob 5th and Sam King who had consistently finished his heats well starting in 6th.

The race started well with the top 4 line astern until disaster struck for Alfie on lap 2 who threw a chain. Oli Nitch-Smith was starting to make his way through the field having started further back due to a DNF in an earlier heat and once the top 3 started battling was able to catch up to the back of the pack. A mistimed move by Mitchell on Sam put both of them wide, allowing Oli through to second place. The fresher tyres, having missed round 1, were definitely paying off as Oli was able to reel Jake in and overtake him a couple of laps later at hairpin 2. Rob Cox by this time had been able to catch the following pack and the race was on with four drivers battling for the remaining trophies. There were numerous overtakes by all these drivers – check out the final here – but eventually the podium looked like this:

Missing out on a trophy was Andy Wagstaff who had been unlucky all day but had a great final eventually bringing it home 6th from 13th on the grid. Jim King who was similarly beset by bad luck also had a great final, setting lap times that could have easily put him in the top 6.

A well-deserved driver of the day (sponsored by SJM – congratulations Sam on getting married at the weekend!) went to Steve King who seemed to make real progress this weekend. He didn’t have a great final but had excellent pace in the heats.

Thanks to all of you that make these race weekends so good. The atmosphere continues to be very friendly where everyone is more than happy to offer help, advice, parts etc whenever needed and long may it continue. Special mention to Phil for helping us with scrutineering and pitching in whenever he can. Here’s Sam welding Rob’s side pod bar using a welder borrowed from Gary so he could race in the final.

All the videos by Alpha Live can be found here:

We’re very much looking forward to returning to Lydd for Round 4 on 3rd June and hope you can all join us. Entries are now open – https://kartcup.co.uk/product/race-entry-round-4-lydd/